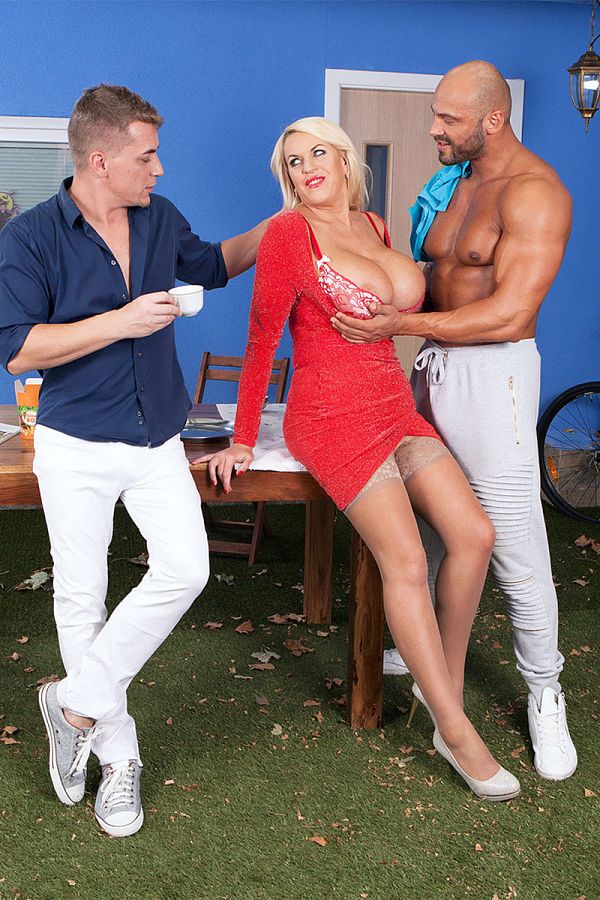 Shannon Blue is, without a doubt, the most-famous big-titted divorcee in the UK. But she didn't always have big tits.

"I was very thin when I was younger and I had very small, perky breasts," Shannon, who's 53, said.

One of Shannon's fantasies was to have big tits. When she broke up with her husband, she used part of her divorce settlement to make that fantasy come true. The UK tabloids found out about that and turned it into a big scandal. We see nothing wrong in a woman doing what Shannon did.

Another of Shannon's fantasies was to get fucked by two men. If you ask us, all Shannon would have had to do was grab any two guys within earshot to make that fantasy come true. Instead, she came to us. Lucky us. Lucky Matt and Steve, who do the honors in this scene.

Shannon and Steve are preparing lunch for Matt, but Shannon, whose tits are pouring out of her tight dress, has no interest in food. The only meat she wants is in their pants, and she's a woman who gets what she wants, especially now that she's divorced. She sucks their big cocks and gets tit-fucked, then the guys take turns on her pierced pussy and tight ass.

"What I do now is the best," Shannon said. "I wish I had done this sooner."

Hey, there's no time like the present! Shannon told us her kinkiest sexual encounter was "being fucked up against a tree after being tied to it." We say getting ass-fucked by two guys for all the world to see trumps that.

Hey, Shannon, got any more fantasies?

Register your 100% Free Stripchat account today and enjoy the hottest girls and couples live on cam! No Credit Card required! No restrictions or limitations! Unlimited access to all chatrooms!