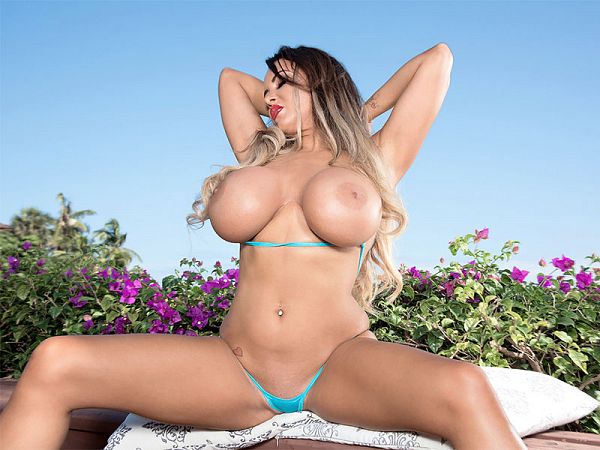 There are times when the studio staff will ask the editors what the girls should wear for a shoot. When I saw Danniella Levy, the first outfit I suggested was a tiny bikini (and super-high heels). The location was swanky and the weather was fine so it all worked out.

Danniella has one of the dirtiest mouths you could ever hope to hear. She's a natural at it and practices her wank talk (Brit speak for jack talk) on British television station Babestation. I don't think there's anything similar in the USA. They have their limits to what they will do so there's rarely anything very explicit. Danniella reminds me of the era when topless girls filled the pages of the British tabloid newspapers.

"I do the day show," said Danniella. "It's an implied-nude show. It's a talk show, so people call in for telephone sex. We have lots of fans. When I'm being really filthy, I'll say pussy, but for everyday use, I'll say noonie. We have a British term for tits in cockney rhyming slang, Bristol Cities Titties."

Danniella used to be a stewardess. Just imagine a long flight with her on-board in her tight, little uniform.

Register your 100% Free Stripchat account today and enjoy the hottest girls and couples live on cam! No Credit Card required! No restrictions or limitations! Unlimited access to all chatrooms!